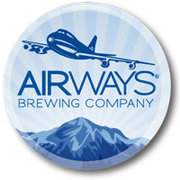 The Rotary Club of Des Moines is pleased to announce that Airways Brewing Company will be returning to pour their hand crafted tasty brews at the 3rd Annual Poverty Bay Blues & Brews Fest on August 25th at the Des Moines Beach Park. Alex Dittmar, a visual designer for Alaska Airlines, likes airliners. And he likes beer. Opening up Airways Brewing Company, Alex was finally able to combine both loves. Airways is Kent’s only beer-making establishment and is the product of Founder/Brewer Dittmar’s imagination. As a home brewer, Alex won several awards for his beer, including 1st place in the San Diego Fair for his ESB the first time he entered a competition. In 2009, Alex decided to take his brewing to the next level. Airways opened its doors on March 4, 2010. In 2011, Airways opened their Bistro and in May of this year, after 18 months of construction, they opened their brewhouse.

Friendly service and tasty beer make Airways Brewery a favorite of locals as well as beer enthusiasts from all over. Their tap room features full pints and growlers of their five standard beers:

To find out what other select brews are being served at the Poverty Blues & Brews Fest or to purchase tickets, please visit www.dmrotary.org.]]>